Home » Blog » The Bug That Causes 80% of Peptic Ulcers

The Bug That Causes 80% of Peptic Ulcers 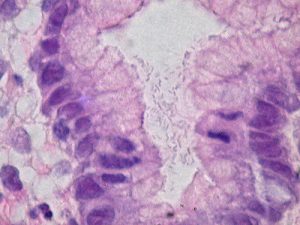 It’s an explanation we’ve probably all heard at some time or another. It was considered medical fact until two Australian physicians challenged it in 1982.

Barry Marshall and Robin Warren noticed that a bacteria called Helicobacter pylori, often abbreviated as H. pylori, could be cultured from peptic ulcers and gastric cancer. It occurred to them that the bacteria was actually causing the disease. Determined to find out, they started experimenting with animal models. Lab mice and pigs were not good models because the bacteria does not affect them. It would be unethical to recruit other people as experimental subjects. Finally, Dr. Marshall decided to run an experiment on the only patient he could ethically recruit: himself. He cultured the H. pylori from one of his patients and found which medications would kill the bacteria in the lab (in this case, bismuth and metronidazole). Dr. Marshall then treated the patient and performed endoscopy (a camera down the throat into the stomach) to make sure the patient was cured. He made a broth from the very same H. pylori he biopsied from his patient and drank it himself. A few days passed before he developed vomiting, weakness, fatigue, and bad breath, the same symptoms as his patients. He had endoscopy performed to confirm that he now had the infection in his stomach. He went straight back to his lab to culture the biopsies from his own gut. The result was conclusive: H. pylori had caused the disease.

H. pylori is a spiral shaped bacteria with two to seven flagella (tail like structures) to help it swim. It is perfectly suited to the human stomach where it lives. The bacteria produces a substance called urease which helps neutralize stomach acid in the gastrointestinal tract and forms a protective cloud around the bacteria. H. pylori is also able to regulate its own pH by allowing acid to move in and out of its cell walls. Its shape and flagella allow it to maneuver through the layer of mucus which protects the stomach cells from stomach acid. It then attaches itself to the stomach lining, causing infection to its host.

Studies suggest that humans have served as a host to H. pylori for some 58,000 years. It is estimated that at least 50% of today’s worldwide population is infected with it. Current theories propose that infection occurs in childhood, though the actual route of infection is uncertain. Theories about the method of transmission include contaminated water supplies and person-to-person transmission (fecal/oral or oral/oral). The risk of acquiring the infection is related to the number of siblings in a family, overcrowding, lack of running water, sharing a bed, and other socioeconomic factors.

After their discovery, Dr. Warren and Dr. Marshall had a difficult time convincing the rest of the scientific community of their results, in spite of the number of patients they cured using antibiotics. Eventually, the American National Institute of Health and Food and Drug Administration helped spread the news. The discovery revolutionized the treatment of ulcers from dramatic surgeries removing part of the stomach to a simple regimen of antibiotics. The incidence of gastric cancer, once very common in the Western world, decreased dramatically. For their work, Dr. Marshall and Dr. Warren shared the Nobel Prize in Medicine and Physiology in 2005.

There are several tests available to diagnose H. pylori, including breath tests, stool tests, and biopsies performed during endoscopy, some of them developed by Dr. Marshall himself. The drugs Dr. Marshall used to cure his patient’s and his own infection, bismuth and metronidazole, are still used in antibiotic regimens for patients today. Currently, Dr. Marshall is working on using H. pylori as a vehicle to deliver vaccinations, such as the flu vaccine, to patients. He proposes that this method of vaccination would be much more cost efficient than the methods currently used today.