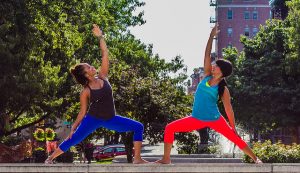 Irritable bowel syndrome (IBS) patients suffer tremendously with their symptoms, which can include diarrhea, constipation, bloating, abdominal pain, burping, and acid reflux-like symptoms, among others. While there are medications available to treat those symptoms, it can be a long and frustrating process to find the right ones for each patient. Right now, we aren’t sure exactly what causes IBS, so the medicines currently available mostly target symptom control. While finding the exact cause of IBS is an area of active research, the present lack of curative medications has inspired researchers to look for alternate therapies for irritable bowel syndrome sufferers, such as yoga.

The West first became aware of yoga in the late 1800s. Western interest in Indian religion, philosophies, and religious practice has occurred in cycles since then. But yoga itself is much older. While the exact date of its origin is unknown, it is generally accepted that it started thousands of years ago in India. While yoga can be used as part of religious practice as a method to elevate oneself to spiritual liberation, it does not have to be used that way. Many people practice yoga as a form of exercise, meditation, and relaxation. One of the goals of yoga is better integration of the mind and body through various poses. Its practice also helps increase muscle strength and flexibility, promoting physical health.

Many studies show yoga can be helpful for symptom control in IBS patients. Yoga is particularly helpful for abdominal pain and discomfort, though study participants reported it could be helpful in better maintenance of GI symptoms as well. Some poses are considered more effective for irritable bowel syndrome than others, as some put gentle pressure on the gut and some stimulate relaxation of the gut. Other poses are meant to stimulate elimination. Yoga can also help patients better understand and listen to their bodies, including those particular things which act as triggers for episodes of irritable bowel syndrome (some common examples include too little sleep, certain foods, or stressful situations). The scientific mechanism of action (how exactly practicing yoga achieves these outcomes) is not yet known. A yogi would probably say the poses help align energy flow through areas of the body called chakras. These areas are believed to be centers of energy connecting the physical body to the mental and spiritual body.

Unfortunately, most of the studies evaluating the use of yoga as therapy for irritable bowel syndrome are small, with just a few patients. Some of them have flaws in the study design that make the results less rigorous from a scientific perspective. It’s hard to make a generalization such as “yoga is indeed helpful for many IBS patients” with some of these flaws. The current position of the American gastroenterological professional societies is that further research needs to be done before a concrete recommendation for practice of yoga in irritable bowel syndrome can be made.

Yoga as either a primary or adjunct therapy (use in addition to medication) for irritable bowel syndrome is an exciting area of research. For patients looking for a more natural approach to controlling irritable bowel syndrome symptoms, yoga is worth a try. It certainly gives benefit in just getting regular exercise and there are few risks involved. It also has potential health benefits other than just those associated with IBS (for example, helping with mood, chronic pain, flexibility, fatigue, and sleeping problems). Of course, before starting any new exercise regimen, it’s a good idea to get a check-up with your doctor.